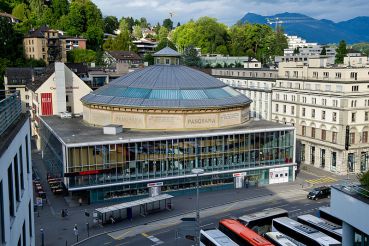 Huge panoramic painting created in 1881, is now one of the main attractions of Lucerne. The painting depicts the French Eastern Army under General Bourbaki during her escape to Switzerland during the German-French war. The canvas is the clearest example of the panorama of 19th century art.

While viewing historical panoramic picture to learn more about the great feats and defeats, merged together in the period 1870 - 1871 years. Bourbaki is designed not just to move the audience into a world war, but to show the tragedy of human lives, disasters and the importance of mutual aid and compassion. Striking three-dimensional images in the foreground exhibited real objects that smoothly into the contours of the picture, blurring the line between reality and distant military events.