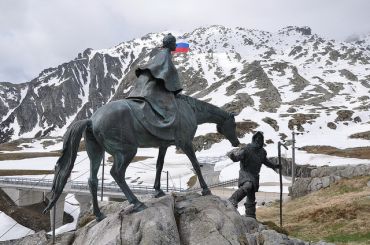 Near the Swiss village of Andermatt, a popular ski resort in 1898 on the initiative of Prince Golitsyn was a monument to General Alexander Suvorov. In September 1799 near these places great battle took place. Russian soldiers under the command of General brave battle with crossed the Gotthard Pass, defeated the troops of Napoleon Bonaparte.
In memory of the fallen soldiers of the Russian army when crossing the Alps, in the wilderness of Switzerland in the gorge and was erected Shollenen famous monument near which annually takes place in the day of battle flower-laying ceremony.