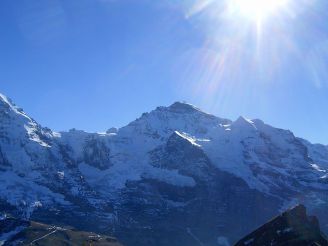 Jungfrau - is the most famous mountain peak in Switzerland. It is the third largest in the Bernese Oberland. The mountain was first natural alpine object which is a UNESCO World Heritage Site. It received its name from the eponymous monastery, which was located at its foot. Northern and north-western side of the Jungfrau covered in snow, but in the west mountain less remarkable and has no snow cover. On the southern side are the glaciers, and on the east side of the pass is the Jungfraujoc.

The main attraction of this mountain is considered Jungfrau Railway, which was built from 1896 to 1912 under the leadership of Adolf Guyer-Zeller. At the foot of the hill is the village of Wengen, which is part of the popular ski area of the Jungfrau Top Region.