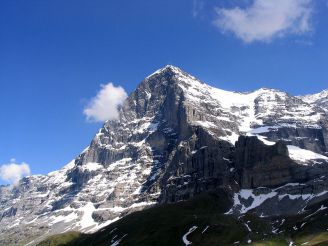 Eiger - a mountain in the Swiss Alps. Its height is more than four thousand meters above sea level. It is considered the highest point of the ridge, stretching up to the mountain Mönch.

The first ascent of the Eiger was made ​​in 1858 by Irish and Swiss climbers, their route lay along the western side of the mountain. The most considered unassailable North Face of the Eiger, it was conquered only in 1938. On its steep slopes killed more than fifty athletes trying to get to the top, as a result, the mountain was named "Wall-killer."