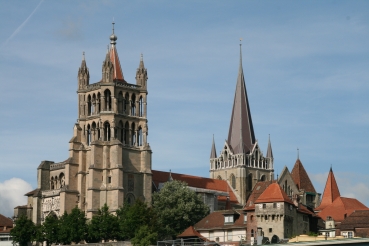 Notre Dame Cathedral of Lausanne, or is one of the most beautiful churches in Switzerland. The temple is located in Lausanne, which is southwest of the country. Its dome and spire vysochat over Lake Geneva.
The erection of the church was begun in 1170, and to this day officially construction is not completed. In 1275 Lausanne cathedral was consecrated by Pope Gregory X in honor of the Virgin Mary. All the subsequent stages of construction were added to the face of Notre Dame their changes. Originally the cathedral was designed in the Romanesque style, and later appeared more Gothic elements.
Facade and the portal of the temple are decorated with carved figures, images of saints and biblical characters. The interior of the striking beauty of Gothic stained glass windows and frescoes on the ceiling, some of which date from the early 13th century.
Visit the Cathedral of Lausanne is available daily. Hours: Monday to Saturday from 8:30 to 11:45 and from 13:30 to 17 pm, Sunday from 14 to 17 hours.