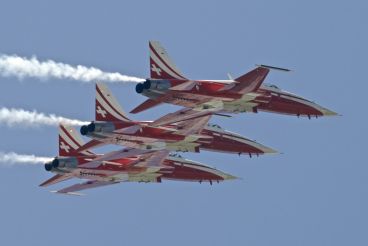 A program of demonstration flights in 2014, the famous Swiss Air Force aerobatic team "Patrouille Suisse". Basically, they will be held in Switzerland and will be touring in Germany, UK, France and Spain. From April 22 to May 2 in different places in Switzerland will be training flights, and May 3 in Verbier held a demo presentation. A full schedule of flights is available on the official website of the Swiss Air Force.

In the world there are a number of famous aerobatic teams. This British "Red Arrows" Italian "Tricolor Arrows", "Russian Knights", "Patrouille France," Canadian "Bullfinches", "Baltic Bees" from Latvia and others. Among them is the "Patrouille Suisse". This year, the squadron's 50th anniversary. As part of the Air Force, she appeared in Switzerland back in 1964. The band for the first time held in Lausanne. Initially, she flew on British fighter-bombers and acted only in Swiss regions. In 1978, the group appeared before the aircraft at the air show spectators in France, so "Patrouille Suisse" was released and in the international arena. 20 years ago, the squadron changed aircraft «Hawker Hunter» more adapted to maneuver more speed and light American fighters «F-5E Tiger II», which are six in number of pieces and uses to this day.

Demonstration flights of red and white colors of the Swiss flag waiting for the numerous fans from around the world. This spectacular airshow under fervent Tyrolean tunes "Flying Circus", showing what somersaults and acrobatics capable planes piloted by masters of their craft. Pilots neutral Switzerland are among the best in the world, are real pros, elite aviation. "Patrouille Suisse" was awarded clock «Breitling Emergency» group with symbols on the dial and a miniature radio transmitter transmitting the signal SOS. This specialized product known firm "Breitling", dedicated to the anniversary of the aerobatic team.

A year ago, the Swiss president Ueli Maurer said that the country is going in 2016 to dissolve the "Patrouille Suisse" for savings. Resource exploitation machines two years later was consumed, and the Swiss Air Force is difficult to find a means to update this fleet. However, both the opposition and the public expressed a clear reluctance to part with aces. There are opinions that the underestimation of the importance of traditions, symbols have a negative impact on the image of the country. No one knows what the story ends in a hurry to see the aerobatics performed by the famous Swiss pilots.